Hello hello hello everyone. Not at the usual 8am slot today but a little bit later. I got a little bit sidetracked today. When I opened my tumblr, I was immediately taken to my review queue. Yes, guylty on tumblr has also caught the unwanted attention of the sex police. Apparently some of my content is “adult”. 😂 Oh cod, could that possibly be because I *am* an adult???

Seriously? What is “adult” about that? The hairy armpit on show? I mean, honestly, this kind of body-hostile censorship is just ridiculous, tumblr.

Anyway, there is a lot of crap flagged in this review queue, and I spent a while going through it and asking for a manual review (by a human!). Unsurprisingly, my requests for appeal were actually heeded, and the content is online again. But yeah, if harmless stuff like mine is getting flagged, it is no wonder if tumblr will eventually fold… Nevertheless, today was a good haul. Here, see for yourself:

Anyway, if you still have some capacity for a bit of RA love, then I am finishing this round-up post with a recommendation. I was joking somewhere in a post recently that some of the unresolved issues of BS could be resolved in fan fiction. Someone asked me whether there actually *is* any Daniel Miller fan fiction. I didn’t know – but I checked. And I found a piece of Daniel Miller fan fic on AO3 that I read enthusiastically and really liked. It’s a story set post S2, and the main characters are Daniel and OFC. I enjoyed the story – which contained smut but wasn’t entirely focussed on the smut but wove a proper spy story around the relationship. The story is called Totally Chemical  and if you go and read it, make sure you leave a comment and/or at least click “kudos” for the writer, Abiwim. (Abiwim actually has other RA related fan fics there, too, so I’d wager that you can fill an evening or two with her prolific output…)

Right, over and out. 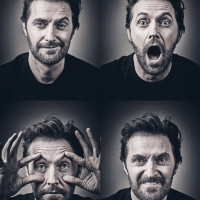