Wow, is this really the ‘exciting news’ that RA wanted to shout from the roof tops when he sent his 2018 Christmas message? I saw the news via Herba and Chrissyinwm this morning – Richard is going to play the lead in Arturo Pérez-Reverte’s 1995 thriller The Seville Communion – which might possibly be called The Man from Rome, if I interpret imdb correctly. I’m going to spare you my usual distrust and unfairly anticipatory nitpicking. Or my reservations re. Catholic priests as fictional heroes. (I live in Ireland, as you know – and we have had more than our share of the nastiest of nasty scandals involving priests. Enough said.) But despite all that I did have to check out the book, not least because I had never imagined Armitage in the role of a priest. A theme very quickly developed:

Quart is no ordinary detective but a sexy soldier of Christ armed with a gold card and a laptop computer.

… the protagonist looking ”like Richard Chamberlain in ‘The Thorn Birds’ but more manly” obviously knows on which side its extravagance is buttered.

The hero in question is the Rev. Lorenzo Quart, the ‘‘sexiest priest” alive, outside of the latest Andrew Greeley yarn. A ”weary, solitary Knight Templar,” Quart works for the Vatican’s very hush-hush Institute for External Affairs, from which he is discreetly dispatched to defuse threats to Holy Mother Church. He is emphatically not ”the kind of priest who turned the other cheek.” He is a St. James Bond, an agent in a Roman collar and handmade leather shoes who wields a Mont Blanc pen instead of a snub-nosed Beretta.

[Click logo to be taken to the cited review.]

That *does* bode well. And I can only say: They definitely got the right man for the job. Handsome? ✔️ Suave? ✔️ Manly? ✔️Sexy? ✔️✔️✔️. Mind you, depends on whether Quart is one of those modern priests who don’t dally with dog collars and cassocks? Big question mark… but Guylty managed to obtain a first look at Father Quart, the ruthlessly handsome (or was it handsomely ruthless?) DM (Detective Monsignore), in costume on set: 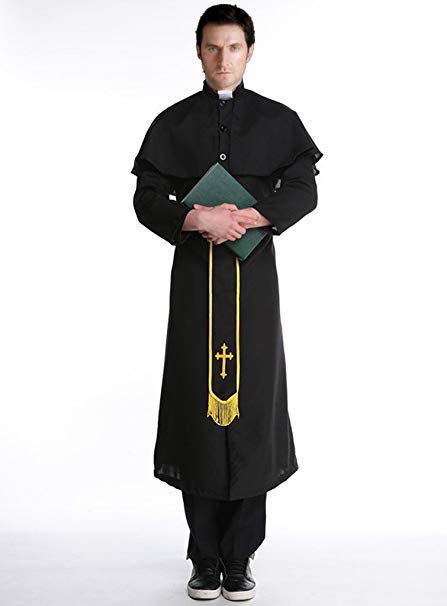 Note Father Quart’s fashion-forward footwear. According to sources who wished to remain anonymous, the actor insisted on bringing his own footwear on set…

Well, that is all very exciting, isn’t it? I’m looking forward to hearing more. Richard, please have mercy, put us out of our misery and confirm.