This is not an April Fool’s joke! Our esteemed fellow fan LoLo played host to Flat Richie on the latest leg of his world tour. LoLo has extensively tweeted about it on her Twitter,  but she has also written a guest post about the “boys” in town. The following text is all hers, as are the photos which I have lifted from LoLo’s tweets. For a geographical overview, I am preceding her report with the customary itinerary map. Flat Richie is already on the way to his 10th hostess. Enjoy LoLo’s report!

After being hosted in Germany by the gracious and generous Nordlicht, Flat Richie traveled across the Atlantic for an unexpectedly prolonged stop at Hollywood. I offer my sincere apologies for his lengthy stay; I was in Las Vegas for a week with my mother and then was quite ill for a long time. But we’ve done our sightseeing and had our fun, and Richie finally began the next leg of his journey on 29 March.

I opened The Package of All Good Things on a Saturday night and chose three lovely items: a heart-shaped keychain containing a photo of our beautiful man, a heart-shaped locket containing a photo of…our beautiful man…and a set of a magnet and heart-shaped keychain from fair Verona. Yes, it was a hearty evening for me! (Sorry, couldn’t resist.) I’ve received so much kindness, encouragement and support from this amazing fandom that the triple hearts were completely apropos. I added my contributions, which I hope will delight others as much as the gifts I chose delight me. 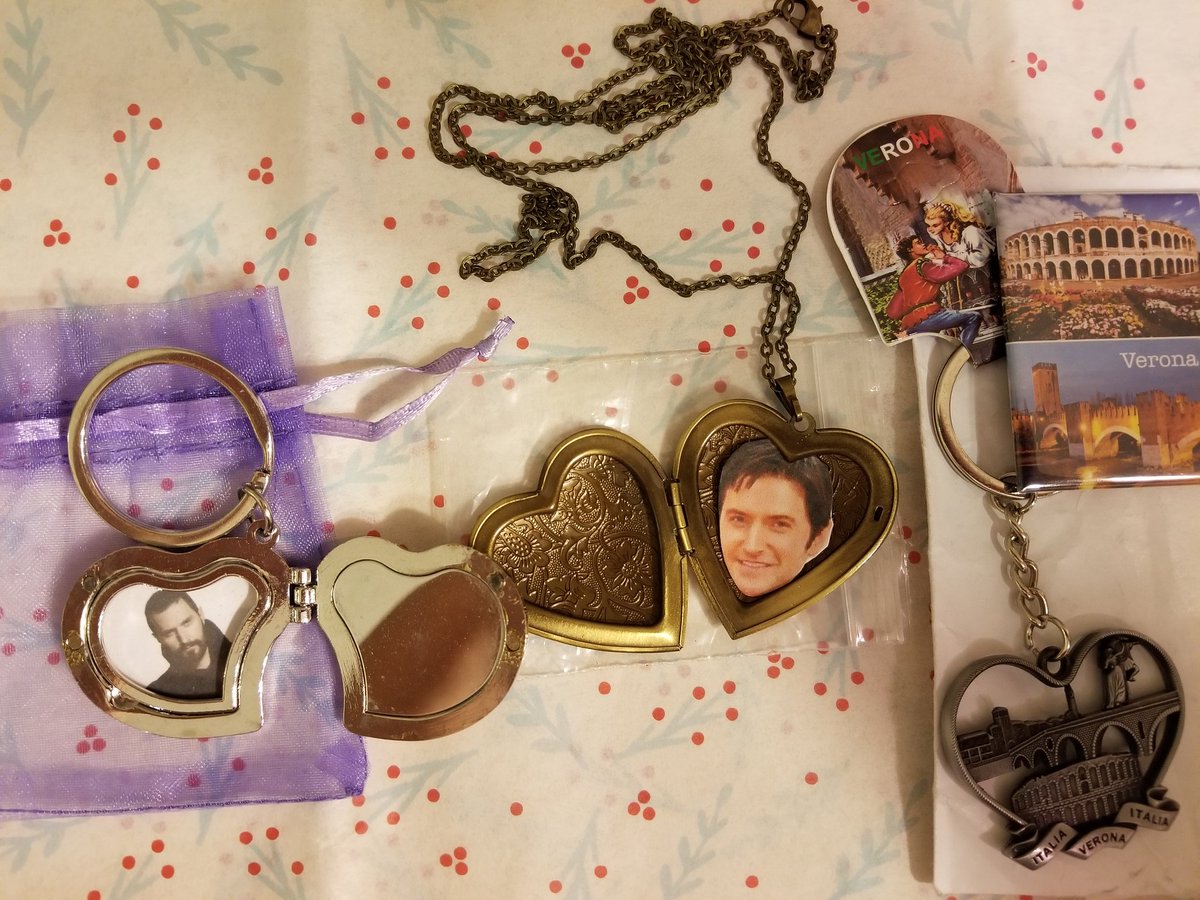 Because I still wasn’t breathing well at that point (and it wasn’t just from mooning over the aforementioned beautiful man), I took two hits from my asthma inhaler and fell into a troubled sleep. I was feeling so guilty about the length of time that Richie, Sir Guy and Thorin were with me that I had an anxiety dream about running all over Hollywood to find the best photo opportunities. During the dream, the fellas and I went to the Hollywood Walk of Fame to visit the star of Tyrone Power, one of my all-time favorite actors. There was something or other in my dream about RA doing a remake of one of Ty’s big hits, the 1942 film The Black Swan, so apparently my subconscious thinks that RA would be perfectly cast in a swashbuckler. Contemplating it while awake, I like it so am putting it out into the universe.

That Sunday evening was rather a comedy of errors, or as we in Los Angeles know it, a typical couple of hours spent in traffic, driving around fruitlessly. I did manage to take the guys to commune with a patch of California poppies in a neighbor’s yard, as well as to investigate the iconic Greek Theatre in the Hollywood Hills. 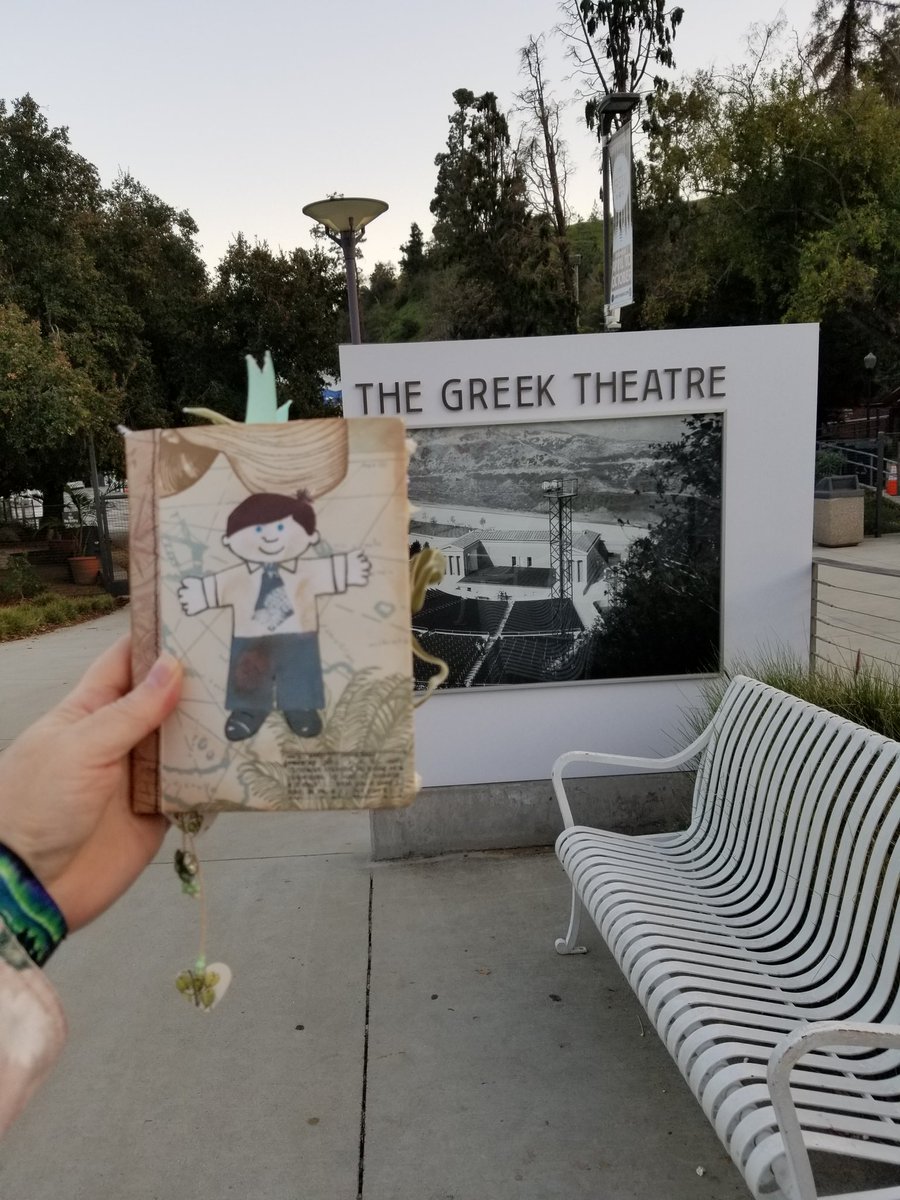 The next day, the Monday, we had much better luck. Our first stop was…drumroll, please! Tyrone Power’s star! I honestly had not thought of making that stop before my dream so it tickled me to do it. I adore Ty so much; he was a gifted actor whose talent was often overlooked due to his stunning good looks. Sound familiar? When I met Maureen O’Hara, who co-starred with him in The Black Swan, I confessed to her that I had a huge crush on Ty, and she said that he was well worthy of it because of how talented and what a gentleman he was. Sir Guy thought our stop was more of a tribute to him, as Ty is the only movie star who is even close to as handsome as he. [If you’re looking to bolster your familiarity with Ty’s movies, btw, I’d recommend Blood and Sand, The Razor’s Edge and Witness for the Prosecution.] 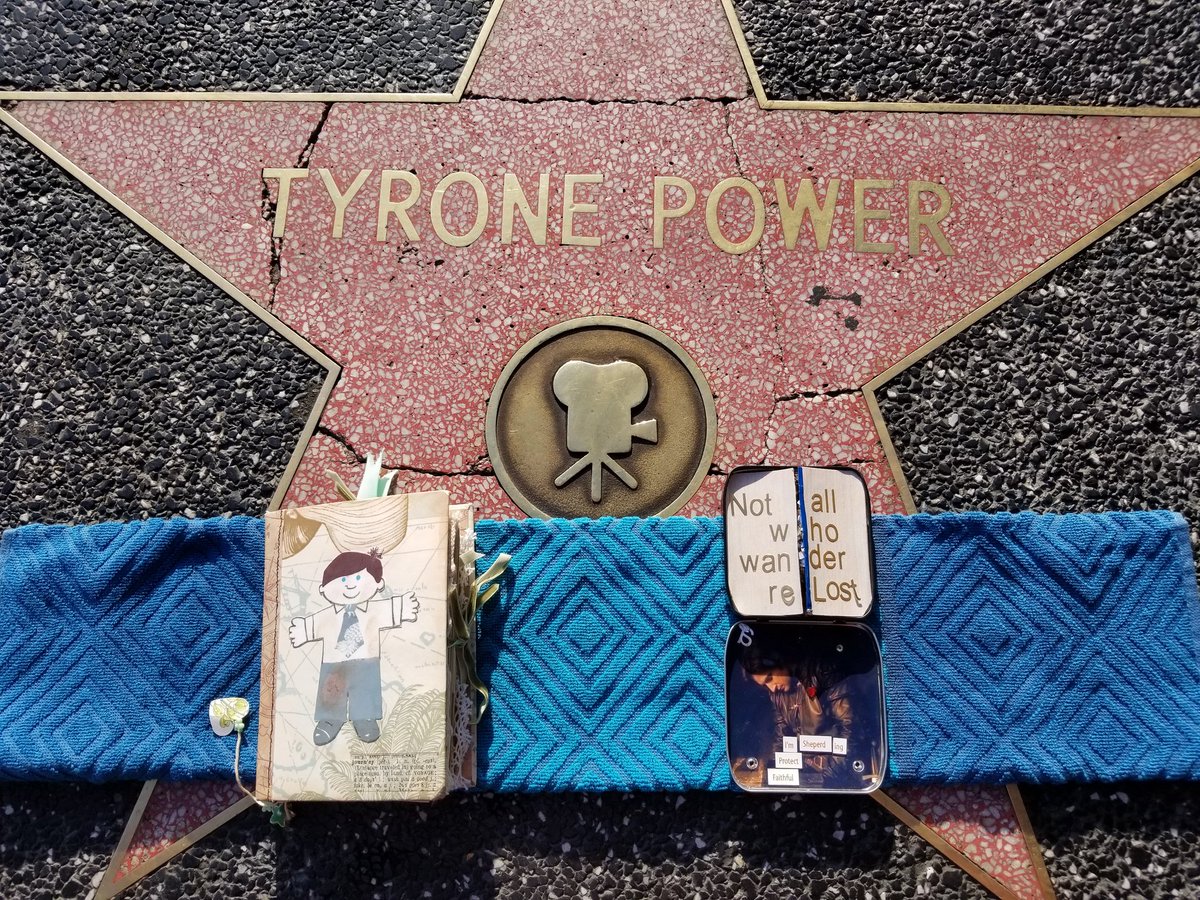 Legendary Hollywood leading man on the star of some chap who was in a film or two.

After that, we traveled farther down Hollywood Boulevard to the Hollywood & Highland complex, which is the home of the Dolby Theatre. Because the Dolby is where the Academy Awards are held every year, we were able to pop into the first-ever Oscars pop-up shop, where the boys persuaded me to spend too much money. Guy, Richie and Thorin took photos with an Oscar-themed step-and-repeat, as well as with an impressive Panavision movie camera.

Our next stop was one of my favorite places in Hollywood, Grauman’s Chinese Theatre (as it was formerly known). This is where the stars have left their hand- and footprints since 1927, which, coincidentally, is how old the Academy of Motion Picture Arts and Sciences is. It may not have the glamour it once did, but oh, how I love that forecourt! Just the thought of the magical, star-filled premieres held there thrills me. Our main destination was the square belonging to my all-time favorite star, Marilyn Monroe. Marilyn and her co-star, Jane Russell, left their marks in honor of the 1953 movie Gentlemen Prefer Blondes. Richie and Thorin were suitably impressed, while Sir Guy made a rather off-color remark that I won’t repeat. Someone’s smirking mouth might need washing out with kisses soap. 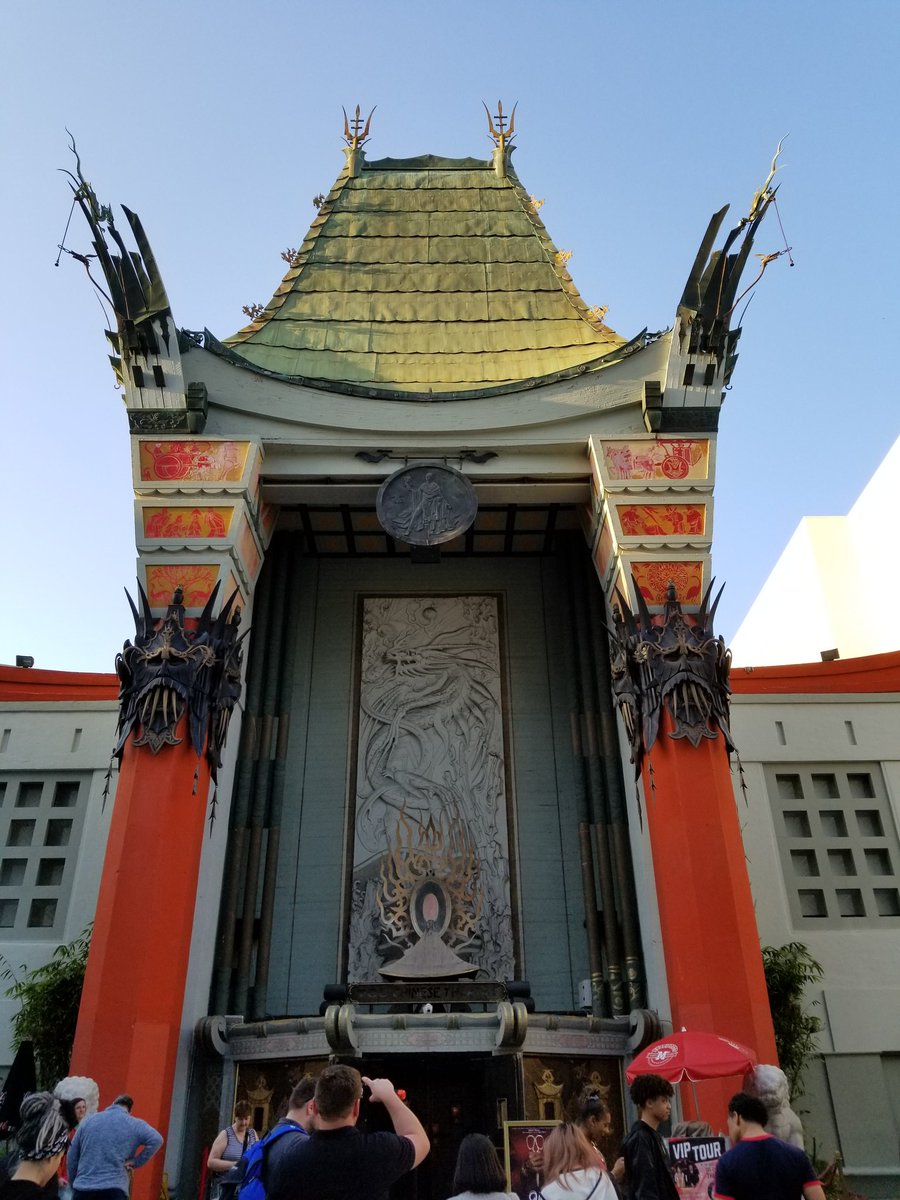 Grauman’s Chinese Theater – how does Richie deal with dragon’s lairds?

My weary bones carried me inside Hollywood & Highland again to forage for food, and while there, we took some snaps of the interior, which is much more stunning in person. We also found the Hollywood sign, and while my stumpy little arms are not long enough to take good photos while holding up Richie, we did get a pic of the sign itself. 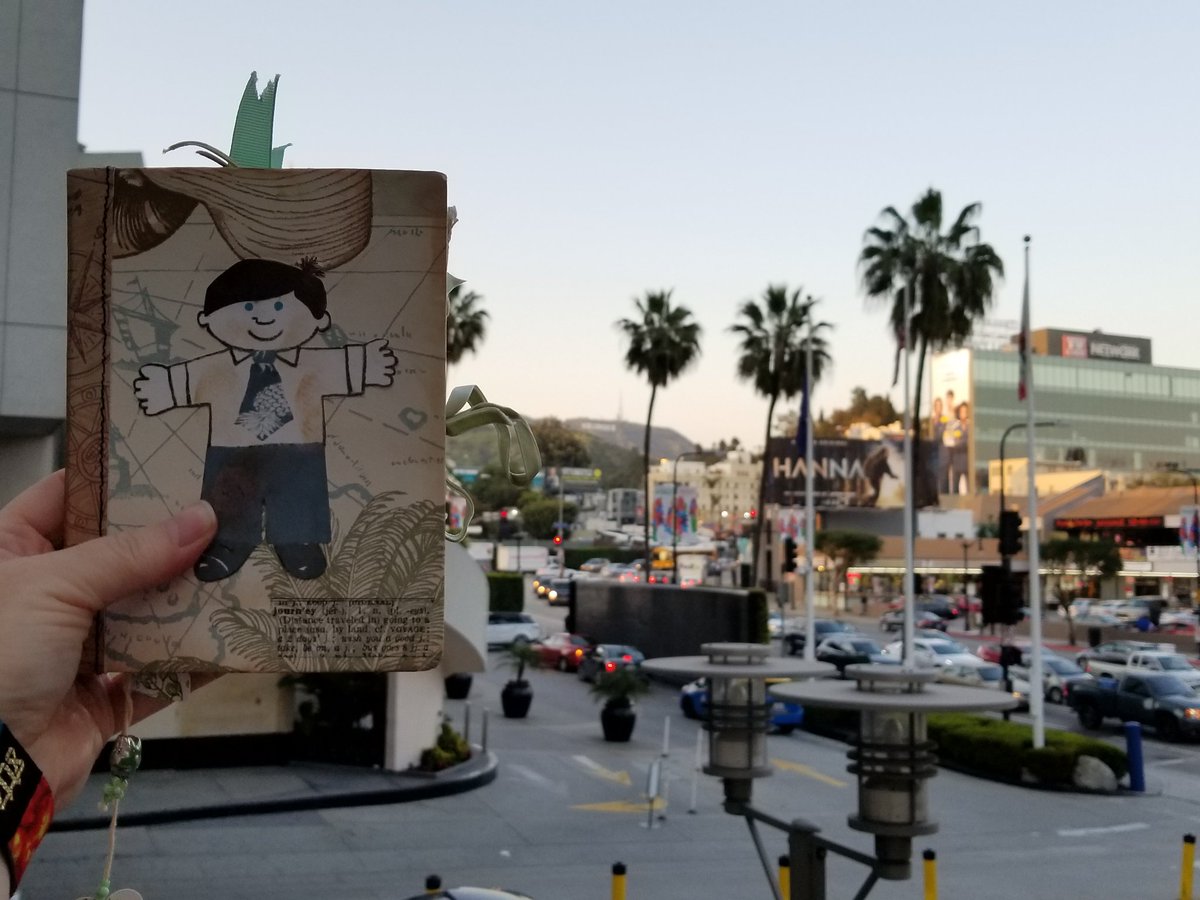 If you can take your eyes momentarily away from the handsome hunk, the Hollywood sign is bang in the centre of the image

The boys stayed with me longer than I had intended that week due to an intensification of my bronchitis/laryngitis/flu/desire to fling myself off my balcony, but I eventually got them packed up and sent along their hopefully merry way. I so loved hosting them and hope that they enjoyed their time in LaLaLand with LoLo. Thank you so much for letting me participate in their adventures! 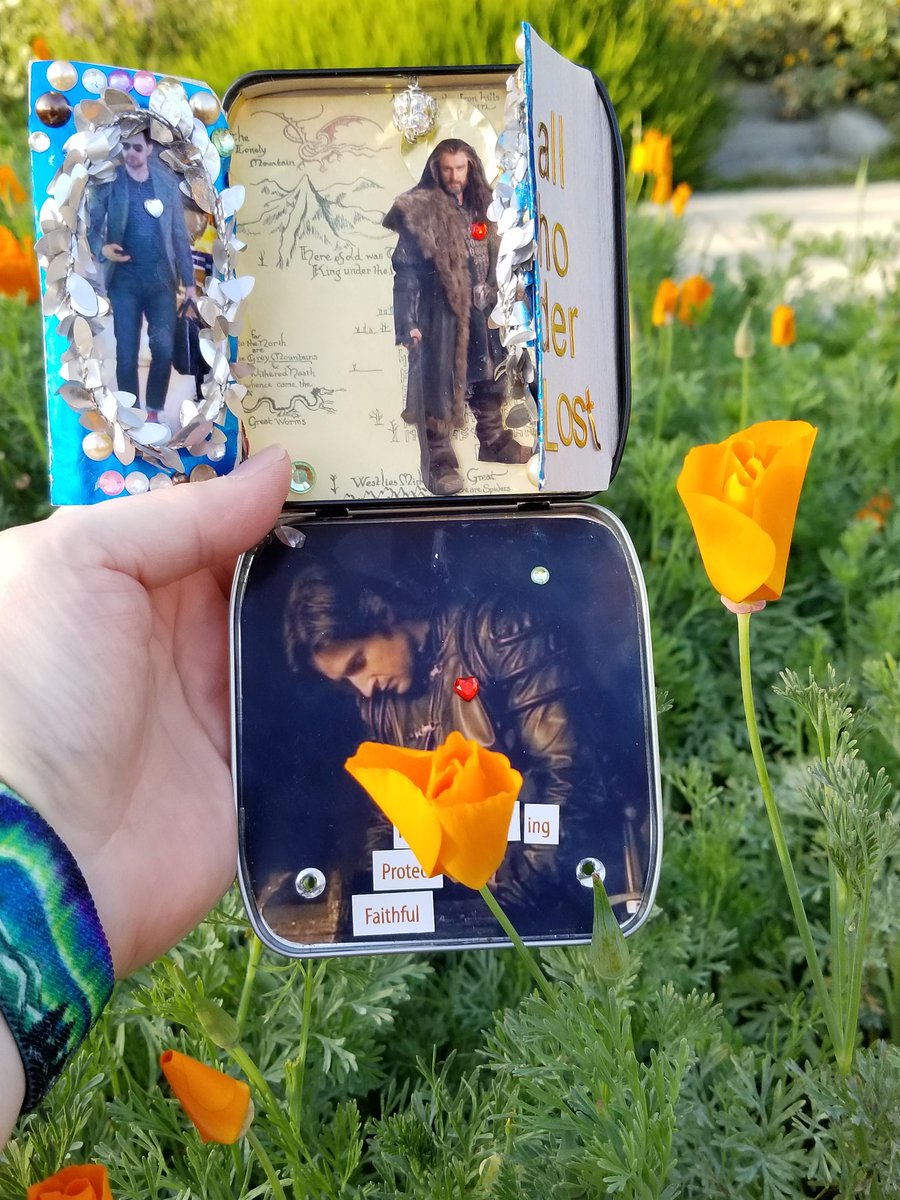 Look who has popped up…

Wow wow wow – that was definitely a proper tour of Tinsel Town, right? Thank you very much to LoLo for taking Flat Richie to see the sights – and for bringing us along. This was such a fun and interesting trip – and oh, I can’t even put into words how much I envy LoLo for the mild weather with poppies in bloom! It is weird and wonderful to know that this little tin that I created and that so many of you already held – and will hold in the future – has been to a place we all know from the movies… It’s a wild ride. And more is yet to come! Stay tuned!