Halleluia! Guess what? I am finishing my Fan A to Z today. A mere eleven (11!!!) months after I started it. Apologies for the time it took.

Z – A chaRActer headcanon you have?

Not sure whether this is a case of ‘leaving the most difficult for last’… ChaRActer headcanons are tricky at the best of times. What is fantasy and what is recurring backstory? But fwiw, I have *one* general headcanon that applies to all of RA’s roles: None of them have died. And in that vein, my favourite fantasy object, Sergeant Porter, is still alive and kicking, working as a security contractor and basically specialising in protecting and training aidworkers who go on missions to Africa.

Janie Maccers, this looks like the cover of a romance novel right there… Screencap from Strike Back

Alright, alright, that’s straight from a story that hasn’t even sprung from my own imagination but from RAllatrix’s. She wrote this awesome piece of fanfic years ago, and I think that the scenario really holds. For those of you who haven’t read it yet, I recommend you give Chance Encounter a try.

Right, that’s it. I am giving myself a badge.

In the unlikely event that anybody wants to read up on the whole alphabet, you can start on A HERE. 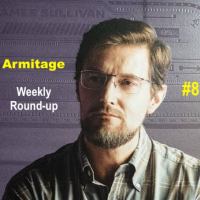