Try saying that. “Otps” Not really that snazzy a term, I guess. But how do you describe a pocket shrine that is off topic? Off Topic Pocket Shrine – OTPS. There are only a handful of those. The pocket shrine is really reserved for Mr A. In the past I have only cheated on him when I made a Ciarán Hinds shrine for Linnetmoss. A couple of years ago I created a pocket shrine for my mum – as a gift card to say that we were giving her a weekend in a hotel as her birthday present. But that was it, no other pretty film stars had made it into a shrine. But then I decided to make an exception the other day. 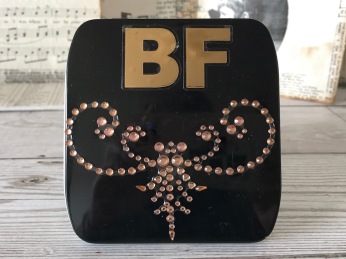 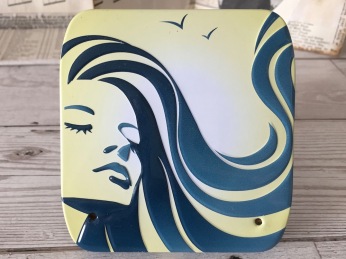 BF does not stand for “best friend”. The letters are the initials of author Beth Freely who recently published her second novel. Beth was looking for reviewers of the audio book version of her novel on Twitter. I applied and was given access to the audio book for free. I then had the pleasure of listening to the novel while doing my crafty work, in return for a review. And somewhere along the way Beth, who is also a fan of RA, had seen one of my shrines and asked me what she would have to do in order to get a shrine made for her. I usually don’t want any monetary transactions for my fan art, so I simply decided to make a shrine for her as a gift, not least because I don’t have any major costs (apart from labour and creativity) to make the shrines. This one, for instance, is housed in a tin that came from a big stash gifted to me by Radagast. There was only one snag: Beth has developed a side crush on the narrator of her book, so the shrine was not to contain RA but someone else… But hey, I love a challenge… 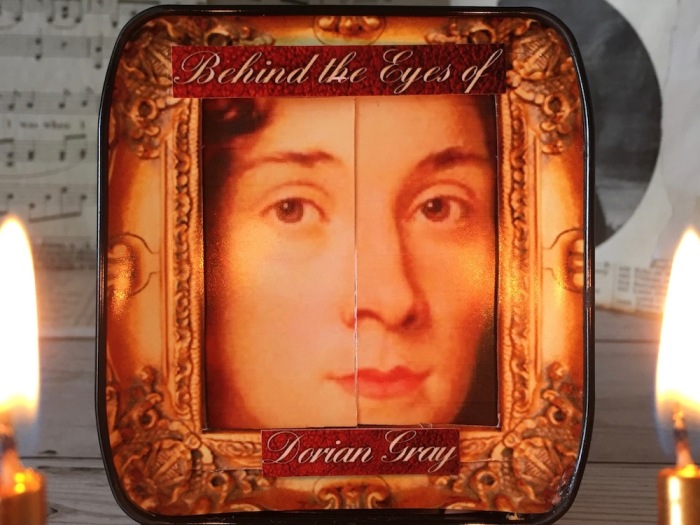 Have I mentioned the title of Beth’s novel? You can see it there on the top part of the shrine, in the original font as used on her audio book. Behind the Eyes of Dorian Gray. Without giving away too much about the novel, I’ll just say that you can assume it involves the famous portrait as invented by Oscar Wilde. And it was a logical conclusion that the shrine had to reference that. So there you have the opulent frame with the portrait of the beautiful young man… What’s behind his eyes?

Maybe you recognise him. This is where fandoms cross paths, as narrator Max Brown is also an acting colleague who starred in season 9 of Spooks alongside our own RA. Max played Dimitri Levendis (see gif right).

Anyway, I am much in awe of anyone who can write a whole novel. You could say I light a candle for novelists 😉 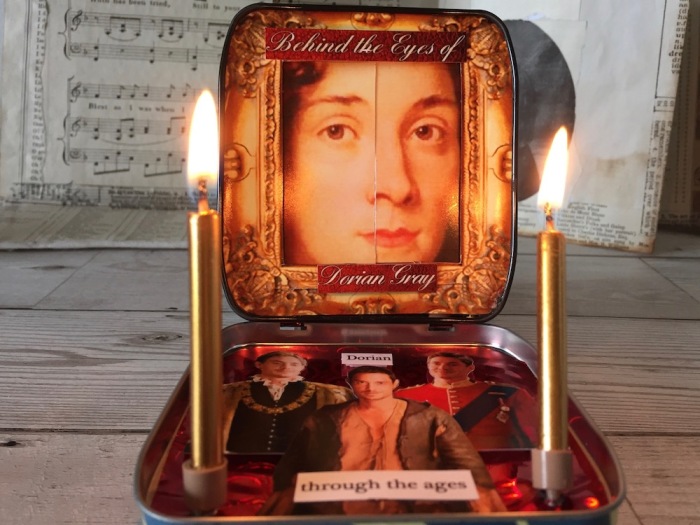 I am not spoiling the novel with these pictures, I hope. I mean, the story of Dorian Gray is well-known, so I am not disclosing the plot as such. Max has starred in a number of high-profile period shows, among them The Tudors and Downton Abbey, so it was easy to find some visualisation of Dorian through the ages…

I must admit, making this shrine also felt a bit like cheating. And it was also slightly more difficult than creating a RAPS. The RAPS is easier because I know RA’s oeuvre pretty well, and so I know where to find the appropriate illustrations for whatever sentiment I want to express. But fun it has been. So may it now work as an inspiration or just a fun reminder for Beth of her own smashing work.

PS: Happy Mother’s Day to all who celebrate. And happy Sunday for all who don’t 😉