This is one of two moments you have been waiting for! Today, after several days of packing, printing and dispatching, I have finally shipped the last of the parcels with your purchases. You should’ve all received notification by now from eBay and/or Etsy regarding dispatch of your purchases. Not all items have been sent tracked/registered (that depended on the purchase price) but tracking numbers have been passed on via the relevant platform to those who are expecting a valuable shipment. For now, I keep my fingers crossed that your items will arrive with you safe and soon!

So, with the postage costs finalised, monetary donations added up, and net proceeds of the Etsy sale and eBay auctions identified, I can now give you the final tally.

Wait, I thought it would be fun to do it in a video. I suggest you sit comfortably, set down any beverages, and breathe carefully.

Everything ok? No drinks spilled? In case that all passed by you too fast: The final proceeds of the 2021 #RA50Auctions fundraiser is € 14,454.20. For our fan sisters in the US that is US$ 17,011.22. And the donation generated for LOROS will be ￡12,368.89 (or most likely a sum a little smoother than that because I like to round it up a little). In any case, this is a record result, bigger than anything we have generated before! By multiples, in fact. Our highest amount so far was last year’s birthday fundraiser in excess of €3,450. This time we have quadrupled that result!

Granted, round-about half of our proceeds – or €5,888.94 to be exact – were generated by the fantastic contribution by Richard, in the shape of Guy’s jacket. However, our *own* fan auctions generated a total of €5,031.77. 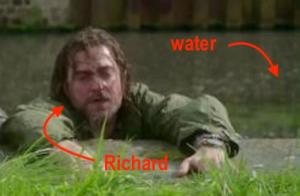 Add to that our Etsy proceeds of €1,536.34, and we have already trumped our very generous favourite actor! And *then* add another €2,730.15 from monetary donations, and we have blown Richard out of the water (see right). 😉

No, it’s not a contest, I know that. But it is nice to know that our “birthday gift” is such an amazing amount.

So, remember Richard’s added thank you on his birthday video?

What an amazing result for LOROS!!! We are going to make a huge difference for them. Richard has already matched the bid and donated yesterday. He added a lovely little nod to our fundraiser in his message on muchloved.

Which brings me to the all-important second moment you are waiting for. Our donation. I am so sorry that our birthday present has been delayed so much. I’ll refrain from more “Sonja in apology mode”, but I want to at least explain what is holding me up now that all shipments have been dispatched. While proceeds from Guy’s jacket and Etsy, as well as all monetary donations have already been received in my account, I am still waiting for eBay to transfer the remaining proceeds of the fan auctions. It is a sizeable sum in excess of €5,000, hence I need to wait for its arrival in my bank account before I can transfer the donation in full to LOROS. The hold-up is apparently a routine review “of some details”. I have been in touch with eBay already (hooray for eBay Ireland again) who have assured me that the funds will be released tomorrow (26 August).

Fingers crossed that my bank processes the dosh quickly. I really want to move on with that donation – you have all been waiting much longer than planned, and Richard’s birthday is long past…

But for now – savour that sum again.

Thank you to all of you. All – of – you. I will add proper and personal thanks, as well as some more detailed accounts once I can finally notify you of the transferred donation.