We have wished for a period piece, and I suppose The Boy in the Woods is such. Deadline names Richard as one of the leads in their article, accompanied by a first glimpse of Richard in the role of farmer Jasko.

I’m having visions of John Proctor… maybe Richard can draw back on his 7-hour axe-sharpening again for the role.

Brrr, they are filming in Canada now – and winter is coming 🥶. I hope he has some thermal undies under the farmer garb. Otherwise my vision of Proctor will transform into visions of Dolarhyde 😬. (Warning: horror haters please quickly scroll over the illustration below!)

Not necessarily a film that I would look forward to under normal circumstances (the Holocaust as a subject needs extreme care), but I appreciate that RA’s role choices are once again giving me the opportunity to open my mind. 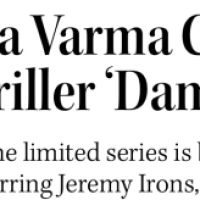