Hello m’dears. It’s two weeks since the last round-up. You may have already copped on to what that may mean. I have been away. In New York. And yes, I have watched LLL. The week in New York meant that I did not have time to compile a round-up last weekend. With the big apple waiting outside – and Richard and fans at the stage door – I could not/would not justify spending time cooped up in my hotel on the laptop.  I returned home on Thursday morning and plunged straight back into my normal routine of work and life, after a 3 hour nap. I was completely out of it for a day, the jet-lag had me firmly in its grip. I felt as if I was walking around in a cotton wrap – strangely removed and wobbly. Or maybe those are the symptoms of the effect a close encounter with RA on the stage and at the stage door have on a sensitive fangirl? In any case, I acclimatised on Friday, and now am largely back on form.

Enough form to compile the round-up. I know, many of you are waiting for my review of the play, my account of the stage doors, and a word on the fan encounters I was lucky to have. Stage doors and fan meets are first and foremost on my mind, but somehow the weekly round-up has become a bit of a duty to me, and I feel that I need to get this out of the way before my mind is free to deal with a write-up of all the things I have done and seen over the last week. I will get to the play, the stage doors, the fan meets, my New York photos over the next days. I’ll only say this for now: It was brilliant, in almost every way, and I was lucky to have been able to make the journey. Seeing Richard Armitage live on stage is *always* worth it. But what made this transatlantic journey extra-special, was the wonderful, meaningful encounters that took place in New York. I’ll get to it in due course!

As for now, the round-up is extra big this week, thanks to the backlog of noteworthy posts. Since I am covering more than one week, I have actually organised and grouped the links a little bit according to show/chaRActer and RL New-York related stuff. I guess, my mind is still looking for ways of finding perspective on my own various interests – the unfinished analysis of BS, the ongoing stage door excitement in New York, and the various other chaRActers popping up on tumblr. You’ll notice it when you go through the links. Enjoy! 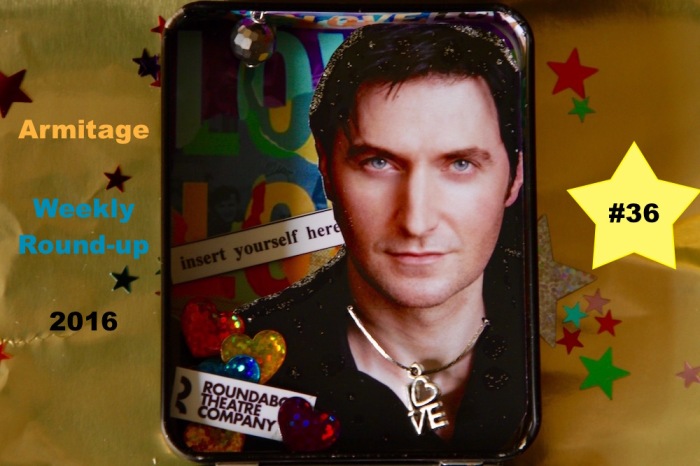 Hope you have enjoyed this packed edition of the Weekly Round-up! If anything, I hope it has distracted you from the dire political news of the world. We all need a bit of distraction, I think, and messages of love and appeals to concentrate on our shared characteristics rather than what separates us, are needed and appreciated. I don’t feel like dancing right now, but I definitely believe that we should not waste our lives arguing destructively, but working constructively to overcome division.